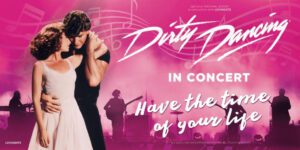 Relive the timeless love story of Baby and Johnny as global content leader Lionsgate (NYSE: LGF.A, LGF.B), GEA Live and Karl Sydow, along with presenters Innovation Arts & Entertainment and Kentucky Performing Arts, announce Dirty Dancing in Concert, celebrating the film’s 35th anniversary on a full-size cinema screen with a band and singers live on stage. With a soundtrack that defined a generation, Dirty Dancing in Concert promises to bring a new thrilling experience to the 80s classic!

Audiences attending Dirty Dancing in Concert will experience the hit film in a unique and unforgettable way. A complete screening of the digitally remastered film will play as a band and singers perform the songs live, in sync with the film. Stay for the encore party and continue to sing and dance along with the band to your favorite Dirty Dancing songs.

Dirty Dancing in Concert will tour in 35 cities in North America in 2022. Opening in celebration of the 35th anniversary of the film, fans will have a new way to immerse themselves in the world of Dirty Dancing while celebrating the classic they know and love. The tour comes to The Kentucky Center’s Whitney Hall in Louisville Wednesday, November 9.

Dirty Dancing, written by Eleanor Bergstein, directed by Emile Ardolino, and starring Patrick Swayze and Jennifer Grey in their most iconic movie roles, was a worldwide box-office sensation when it was released in 1987. Its soundtrack generated two multi-platinum albums and multiple singles, including the Academy Award®-winning best original song “(I’ve Had) The Time of My Life”. Grossing more than $213 million worldwide, Dirty Dancing captured the hearts of audiences everywhere. 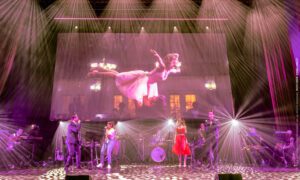 Set in the summer of 1963, Baby Houseman (Jennifer Grey) and her family vacation to the beautiful Catskills resort, Kellerman’s. Intrigued by the staff’s dance instructor, Johnny Castle (Patrick Swayze), and the vastly different lifestyle of others, Baby finds herself learning to dance while having the time of her life and falling in love. It is a summer she’ll never forget.

Dirty Dancing in Concert’s tour joins a series of live-to-film concerts touring internationally based on Lionsgate properties, including the highly successful La La Land in Concert, with more than 125 performances in 25 countries to date.

For more information about the tour, visit www.dirtydancinginconcert.com.

Combining the STARZ premium global subscription platform with world-class motion picture and television studio operations, Lionsgate (NYSE: LGF.A, LGF.B) brings a unique and varied portfolio of entertainment to consumers around the world.  Its film, television, subscription and location-based entertainment businesses are backed by a 17,000-title library and the largest collection of film and television franchises in the independent media space.  A digital age company driven by its entrepreneurial culture and commitment to innovation, the Lionsgate brand is synonymous with bold, original, relatable entertainment for the audiences it serves worldwide.

GEA Live designs and delivers creative projects off all sizes and disciplines. Since 2012, there has been a shift in the company’s focus to film music as a genre. In recent years GEA closely cooperated with the legend Maestro Ennio Morricone (whom GEA exclusively represented for all live touring) as well as with icons of music film industry such as James Newton Howard, Giorgio Moroder and George Fenton. GEA produces live screenings with orchestra and choir of major motion pictures such as The Godfather, Titanic, La La Land, The Hunger Games, Paddington and Amadeus.

In 2018, Karl produced Sting’s ‘The Last Ship on Tour’ in the UK & Ireland, Alan Ayckbourn’s The Divide with The Old Vic and Edinburgh International Festival, Davit Hare’s The Moderate Soprano at the Duke of York’s Theatre and Sketching by James Graham at Wilton’s Music Hall as well as Red Joan, a film featuring Dame Judi Dench which premiered at Toronto film Festival. Karl has produced Dirty Dancing – the Classic Story on Stage across the UK and around the world since 2004.

Bringing world class performances to Kentucky, connecting artists with the community, and providing arts education opportunities, Kentucky Performing Arts lives its statewide mission of building lifelong relationships with the arts.  As an integral member of the Kentucky Tourism, Arts, and Heritage Cabinet, Kentucky Performing Arts, along with the other agencies, seeks to preserve and promote the history, heritage and arts of the Commonwealth.

Three locations comprise the family of venues under The Kentucky Performing Arts umbrella:

The Brown Theatre is located at 315 West Broadway, Louisville, KY 40202