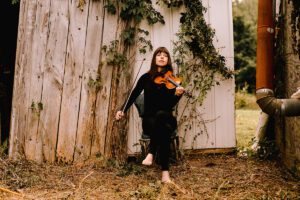 Violinist Tessa Lark, who plays a violin that’s as old as any you’ll ever see, and is about as up-to-date a musical star as any you’ll find, appears with the Louisville Orchestra in the symphony’s season-opening concerts, September 16 and 17 in Whitney Hall.

Music director Teddy Abrams has the baton, with the orchestra also performing Igor Stravinsky’s “Symphony in Three Movements.” Abrams will also introduce three composers selected for the symphony’s new Creators Corps (read more about that below).

Lark is a vibrant young talent, with a raft of classical credits and an ambitious concert tour schedule. She studied at the New England Conservatory of Music and Juilliard, but also grew up in Richmond, Ky., playing with her dad in a gospel-bluegrass group called Narrow Road. So, she was just a hike away from Appalachian mountain music in Eastern Kentucky, and a few miles from formal classical violin study in Cincinnati. 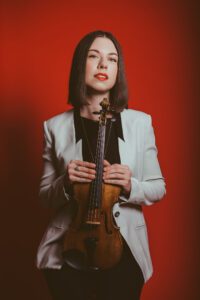 In 2015, Lark was chosen to play an Antonius Stradivarius violin owned by the Stradivari Society of Chicago. In concert performances, she’d occasionally delight classical audiences with fast-bowing encores of old-time fiddling. Now, it’s a special signature.

At the completion of a four-year loan of the 1763 Strad, the society asked Lark to perform with an even older instrument, a violin made by Giovanni Paolo Maggini in 1600. (If you’re counting, that makes her “new” violin 422 years old.) Which, she says, plays beautifully — from mountain music to Mozart.

But Lark told interviewer Musami Rostad she was astonished when she first laid eyes on her new/old Maggini.

In every violin, sound produced inside the wooden box body is projected forth through the f-holes, italic f-shaped openings carved into the violin’s spruce top. Like a speaker, if you will. The f-holes of violas, cellos and basses are also italic f-shaped. Guitars have a round hole.

When Lark lifts her Maggini to offer a close-up view, even a non-player can see the openings are, indeed, larger than usual — though not by much. Maybe the Maggini f-holes appear so large because the f-holes of later violins are kind of tucked into the curves of the instrument’s top.

In the century following Maggini, Italian makers — such as Nicolo Amati, Antonio Stradavari, and Giuseppi Guarnari — scaled their f-holes to a size and shape that makers have been following ever since.

Well, it’s important to violin makers and players. It’s all part of the acoustic magic of the violin. In particular, it’s the remarkable resonance of the thin spruce top into which the sound holes are cut. All those years ago, those early Italian makers got it right.

Lows So Deep, So Broad

“The moment I started playing it, I just loved how it felt to play, how it sounded underneath my ear,” she says.

And most wonderful on its lower strings. “It’s got kind of an earthy and sweet sound,” she explains. As opposed, say, to the high-note brilliance of a Strad. “The lower registers of the Maggini are so deep, and it has a breadth that I really love.”

For online listeners, CLICK HERE to hear the fun conversation between Lark and Rostand about this violin. Near the end Lark plays a bit of Fritz Kreisler’s version of Dvorak’s “Songs My Mother Taught Me,” and the tone is indeed rich and deep.

Of course, the artist pops around on the high strings, too, and it will be interesting to hear how Lark and her violin create the music of the Wynton Marsalis concerto she’ll play on the Whitney Hall stage. 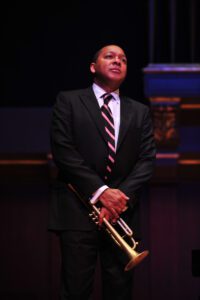 Marsalis is best known as a fabulous jazz trumpeter. But he is also celebrated as a student and storyteller of American music. Marsalis’ career story takes him from church choir and high school band in the jazz capital of New Orleans to a scholar-player’s musical residency in Lincoln Center.

This piece, we understand, captures that same sweep of Americana. One imagines a New Orleans streetcar bell, the rhythm of a rail car picking up speed, and maybe some smoky blues coming from a club downstairs. All lilting licketty-split on Lark’s 422-year-old violin.

The inaugural three are Lisa Bielawa, Tyler Taylor and TJ Cole. A previously composed piece by each will be performed by the orchestra on this concert, with new scores they create to be premiered by the symphony in January and March. All along, the Creators will work on orchestra projects in the community.

“This is a very innovative, special and unique program we created right here — and this is the inaugural season,” says Abrams. “The Creators Corps is all about three, full-time composers who will be coming to our city to make music for all of you, for our community. They will be Louisville composers.”

Popular Symphonies on the Calendar

Highlights of the Louisville Orchestra’s season include several famous symphonies, including Tchaikovsky’s 4th, Bruckner’s 7th and Beethoven’s 5th. For the Beethoven concerts, January 13 and 14, Abrams will not only conduct the Beethoven Symphony No. 5, but play the Beethoven Piano Concerto No. 5. A test of stamina, as well as artistry.

Another highlight from the traditional repertoire will be February performances of the Strauss Horn Concerto No. 1, by the orchestra’s principal French hornist, Jon Gustely.

The LO season also includes the “Music Without Borders” series of free concerts programmed at various community venues, and a new series of appearances across the Commonwealth of Kentucky.

Tuning up for its 85th season, the Louisville Orchestra presents free concerts in September: Saturday, September 10, at the Iroquois Amphitheater, and Sunday, September 11, in Shawnee Park.