Kentucky Shakespeare, the Official Shakespeare Festival of the Commonwealth, is returning to the C. Douglas Ramey Amphitheater in Old Louisville’s Central Park from June 16 to August 15, 2021. “We are beyond excited to finally return to the magical in-person experience of Kentucky Shakespeare Festival in Central Park, after being away from it since the summer of 2019. We look forward to coming together to connect, heal, and again experience the joy together of the free summer festival under the stars,” said Matt Wallace, Producing Artistic Director. “Opening with the stage adaptation of the Oscar-winning Shakespeare in Love is a fitting love letter to Shakespeare and theatre, and it wouldn’t be possible without the presenting sponsor of the production, our partner Churchill Downs. We also return with the epic history Henry V, the culmination of the four-year Henriad tetralogy, Kentucky Shakespeare’s Game of Kings series. What a homecoming this will be – together again in Central Park.”

In addition to the two main stage productions, Kentucky Shakespeare will present the Globe Players student troupe’s A Midsummer Night’s Dream, plus productions from returning guest companies Louisville Ballet and the Louisville Improvisors. The Kids’ Globe tent will open an hour before every performance during the summer with interactive arts-based activities tied to the production.

All performances are presented free of charge at Kentucky Shakespeare Festival in Central Park, the longest-running non-ticketed Shakespeare festival in the United States. 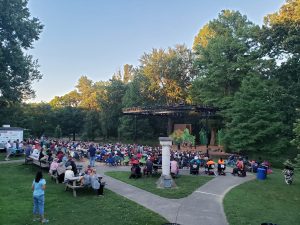 A variety of 28 food trucks from the Louisville Food Truck Association will rotate nightly, plus Will’s Tavern (a Brown-Forman Bar) and Will’s Gift Shop.

Due to COVID-19 capacity reductions and social distancing requirements, people are encouraged to attend on weeknights, arrive early, and bring a blanket or chair in the event that bench seating is not available. Please visit kyshakespeare.com for updates and changes as health and government mandates and recommendation change.

For dates and more information visit kyshakespeare.com or download the free Kentucky Shakespeare app at Google Play or iTunes.

Shakespeare in Love
presented by Churchill Downs
Based on the screenplay of the Oscar-winning film by Marc Norman and Tom Stoppard
Adapted for the stage by Lee Hall, with music by Paddy Cunneen
Directed by Matt Wallace
June 16-July 14; July 21, 23, 25, 27, 29, 31 (no performances on Mondays)
The season kicks off with this Louisville premiere adapted from the 1998 Oscar-winning film. Will Shakespeare has writer’s block, the deadline for his new play is fast approaching, and he’s in desperate need of inspiration, until he finds his muse. The production stars Jon Patrick O’Brien as Will Shakespeare and BeeBee Pattillo as Viola, with Braden McCampbell as Kit Marlowe, Gregory Maupin as Phillip Henslowe, and Brian Hinds as Richard Burbage.

Henry V
By William Shakespeare
Directed by Amy Attaway
July 8-20; July 22, 24, 28 and August 1 (no performances on Mondays)
The final installment in Kentucky Shakespeare’s four-year Game of Kings series, Shakespeare’s Henriad, Henry V is an epic history play – a classic tale of kingship and war that explores the making of a legend. Zachary Burrell plays the titular King, with Mollie Murk as Princess Katherine, Will DeVary as the Dauphin, Kyle Ware as Pistol, and Hallie Dizdarevic as the Chorus/Queen Isabel. The production will again feature original music from Wax Fang’s Scott Carney.

(Due to COVID-19 and to allow for additional distanced seating time, as of now the 2021 Season will not feature pre-show performances.)

Inclement Weather Policy: Performances will not be canceled before 7:30PM. If there is rain or other inclement weather at 7:30PM, a decision will be made and announced before the performance time.

Due to COVID-19 government health and safety restrictions, as of May 2021, the following changes will be made for the 2021 Kentucky Shakespeare Festival. Please visit kyshakespeare.com for changes as government and CDC recommendation changes occur.

ENTRY: If you are feeling ill, have a temperature, or have been around someone with COVID-19 in the past two weeks, please do not attend. This summer the amphitheater will be operating at a required reduced capacity to allow for social distancing. This year there will be fencing around the amphitheater and limited points of entry to the seating area. When you arrive, please read signage and follow instructions from our staff. A member of your party will be required to provide contact tracing information per health regulations. In the event that we reach capacity, you will be offered a voucher to guarantee admittance at the following performance. Friday and Saturdays are traditionally the most crowded nights. If you can, we invite you to consider another night to assist with reducing capacity and spreading out audiences enabling us to meet all health and safety requirements.

MASKS: As of now, all audience members are asked to wear a mask or face covering when entering and moving throughout the amphitheater, as mandated by the state of Kentucky.

SANITIZING: Hand sanitizer stations will be available in the amphitheater.

SEATING: Some benches and other areas will be blocked off to allow for distancing. Please sit only in designated, distanced areas: available benches, picnic tables, and designated/marked grass areas. We invite you to bring a blanket in case you are in one of the designated lawn seating areas.

KEEP YOUR DISTANCE: When moving throughout the amphitheater, visiting the restroom, food trucks, bar, or gift table, please wear your mask and follow all social distancing signage and maintain a safe social distance of at least six feet apart from other guests.

STAFF AND CAST: Kentucky Shakespeare’s staff and cast members will have received a COVID-19 vaccination and we continue to monitor the health of our staff. We ask that our guests also remain diligent in self-care, including hand washing and monitoring their health.