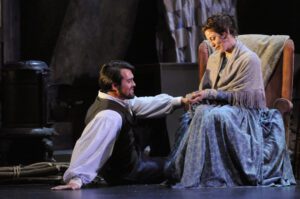 Single tickets for La bohème start at $45.25, with discounts for students and groups, and are available now for purchase by visiting kyopera.org or by calling (502) 584-4500. Discount season subscriptions are also available to purchase starting at $110 and include La bohème as well as 22/23 main stage performances of the tango opera María de Buenos Aires and Rossini’s Cinderella.

La bohème is the sentimental tale of a young group of artists and friends in 19th Century Paris. A chance encounter on a cold winter’s night changes everything for the lives of Mimì and Rodolfo. As they fall deeper in love, we witness their passions and struggles in this authentically human and heartfelt story that has captivated audiences for over 100 years. Kentucky Opera’s production will delight audiences with its grand staging set in the classic time period of the opera.

“This opera has my heart,” exclaims Kitchens. “It was one of the first operas I ever saw as a young person and I was transfixed. I still am. It is such a truly human story where we get a magnificent slice of these young people’s lives in which they wrestle with money, with love, with illness, with grief, and with joy. It telescopes in on the dynamic and the everyday moments of their lives in an almost cinematic way—I absolutely envision this as something Netflix or HBO would be streaming right now! Puccini has written such an exquisitely crafted theatrical opera and I am excited to work with the creative team to bring this to the Kentucky Opera stage. Honestly, I can’t wait to fall in love with these characters all over again.”

Classical Music magazine describes La bohème as “about as perfect as an opera can be. It’s concise, it’s packed with delicious melody and it’s about being young and in love.” 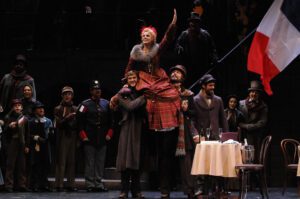 Kentucky Opera’s production will be performed over 120 minutes in four acts and will be sung in Italian with English captions. La bohème will also feature members of Kentucky Opera’s Youth Opera Project and the River City Drum Corps.

Kentucky Opera’s 70th Anniversary Season 22/23 will also feature two additional main stage productions performed at the Brown Theatre – María de Buenos Aires, November 11 and 13, 2022, and Cinderella, February 24 and 26, 2023. December 15-22, a holiday production of The Gift of the Magi will be performed at the Opera Center, Kentucky Opera’s new home on Magazine Street. All tickets are available now at kyopera.org. Student tickets are also available.

Kentucky Opera’s 70th Anniversary Season offers more public performances than recent seasons, centered around bold and diverse topics that highlight the beauty of connections and storytelling through opera. “From the grand opera productions at the Brown Theatre to the intimate performances at Opera Center, Kentucky Opera’s upcoming season offers so much for everyone,” says Barbara Lynne Jamison, General Director & CEO of Kentucky Opera. “As we work to dismantle barriers to opera, we invite everyone to come as you are to see these stunning productions.”

About Kentucky Opera
Kentucky Opera was founded in 1952 and designated the State Opera of Kentucky in 1982. Kentucky Opera seeks to reach and reflect our entire region through opera, promoting a more empathetic, compassionate, and just community with the power of the arts. Follow the Kentucky Opera on Facebook, Instagram, and Twitter. The Kentucky Arts Council, the state arts agency, supports Kentucky Opera with state tax dollars and federal funding from the National Endowment for the Arts