“Barnburner” might seem an odd choice of words to describe a chamber music piece.

But you’ll forgive Nick Finch’s enthusiasm for the classical musical treasures he has programmed for the inaugural Derby City Chamber Music Festival, which unfolds May 20, 24 and 26 at Louisville’s Second Presbyterian Church. It’s a festival, Finch promises, that will return both players and audiences to some of their fondest musical memories.

Not barnburner in the sense of the desperate final seconds of a college basketball game, but as music that lifts the heartbeat and imagination of chamber music fans, and holds them spellbound to the final notes. 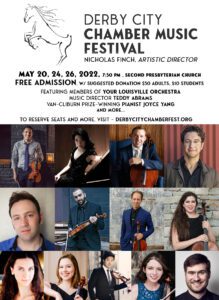 “We are doing the music people love the most,” explains Finch, the principal cellist of the Louisville Orchestra, and a first-time impresario of a festival concert series. “Pieces like the Dvorak American Piano Quartet and Quintet, the Mendelssohn Octet, the Schumann Piano Quintet. When you’re a young person falling in love with classical music, these are the kinds of pieces that really speak to you.”

And keep on speaking.

Finch says the Derby City Chamber Music Festival follows a familiar summer format, like the famous Aspen or Tanglewood festivals — only Derby City is just getting started. The cellist/promoter believes the late May dates fill an open spot on the calendar for many musicians — with orchestral concert seasons ending, and before the beginning of summer festivals. Plus Louisville’s late May days are pretty nice, too.

Several sites were considered, but musicians love the acoustics (and the glorious piano) at Second Presbyterian (2701 Old Brownsboro Rd., 40207). Besides hosting, the church’s music director Jim Rittenhouse, a baritone, will sing on the opening program.

All three concerts are at 7:30 pm, with free admission. Voluntary donations are accepted. A portion of donations from the Tuesday May 20 concerts will be contributed to Ukranian refugee relief. On closing night, May 24, all the musicians will perform Edward Elgar’s Introduction and Allegro for String Quartet and String Orchestra.

Finch says many of the players in the festival are friends from music schools, or have collaborated in different groups. “I just wanted a venue where we could really work together and cross-pollinate.”