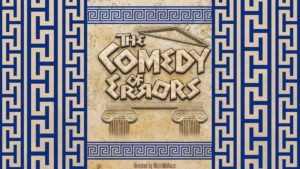 Overview: “We came into the world like brother and brother, And now let’s go hand in hand, not one before another.” Kentucky Shakespeare presents the original situation comedy, THE COMEDY OF ERRORS directed by Matt Wallace at the Kentucky Shakespeare Festival in Central Park. The Comedy of Errors is a zany farce full of physical comedy, mistaken identities, and hijinks galore.

Admission is free! Amphitheater Opens at 6:30 with Food Trucks from the Louisville Food Truck Association, Will’s Tavern opens at 7:00 serving Brown-Forman, West Sixth and 502 Winery products, Pre-Show begins at 7:15 and the main stage production opens at 8:00.