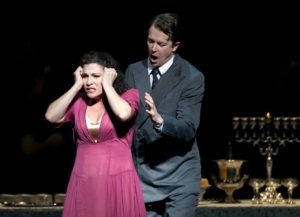 Overview:  A brilliant new opera based on the novel by Isaac Bashevis Singer, which also inspired an award-winning film adaptation. Sung in English with projected English supertitles, Enemies, A Love Story was workshopped as part of Kentucky Opera’s Composer’s Workshop Series in 2009 with piano only. A second workshop at Kentucky Opera featured a full orchestra in collaboration with the University of Louisville in 2011. The World Premiere of Enemies, A Love Story happened at Palm Beach Opera in 2015. The Wall Street Journal praised the production’s “soaring Puccinian lines, folk tunes and klezmer melodies.” This will be the production’s second full staging.

About the Story:
Secrets and lies. That’s the life of Herman Broder, ghostwriter for a famous rabbi in 1948 New York. Herman escaped from the Nazis thanks to his current wife who hid him in a hayloft. But he’s really in love with his mistress, a concentration camp survivor, whom he also marries. And then his first wife – who supposedly died in the Holocaust – suddenly reappears!

Watch what happens when everybody finally meets in this darkly funny and deeply moving tale of hope and fatalism. 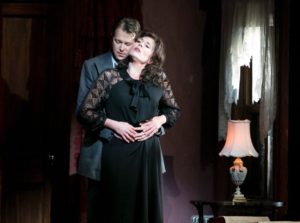 Full Cast: Kentucky Opera has assembled a world-class cast of singers, many of whom are making their debut with the company.

Palm Beach Opera’s “Enemies, A Love Story” Friday, February 20, 2015.STUDENT TICKETS: Kentucky Opera is committed to our community and the next generation of opera goers. Students are invited to attend the Final Dress Rehearsal at the Brown Theatre on Wednesday, November 7th. Tickets are $5. Students are encouraged to arrive for the Opera Preview Discussion with Manager of Education and Engagement, Aubrey Baker. Doors open at 5:30 pm. Final dress rehearsal begins at 7 pm.

ABOUT KENTUCKY OPERA
Currently, in its 67th season of production, Kentucky Opera was founded in 1952 and designated the State Opera of Kentucky in 1982. The mission of Kentucky Opera is to entertain and educate a broad, diverse audience by producing opera of the highest quality. Follow the Kentucky Opera on Facebook, Twitter, Instagram and Pinterest. The Kentucky Arts Council, the state arts agency, supports Kentucky Opera with state tax dollars and federal funding from the National Endowment for the Arts.