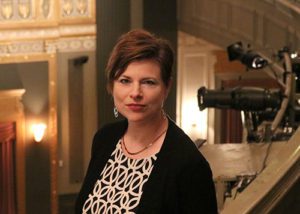 According to a press release, Kentucky Opera’s Board of Directors has announced the appointment of Barbara Lynne Jamison as its new General Director effective August 15, 2018. Jamison will be the sixth General Director in the company’s 67-year history and comes from the Seattle Opera, where she currently is Director of Programs and Partnerships and a member of the senior management team.

Henry Kuehn, President of the Board of Directors, said, “Barbara Lynne Jamison’s appointment marks the successful conclusion of a thorough national search to identify the leader whose vision, creativity and experience will best guide and build the Kentucky Opera. Barbara brings with her expertise as a successful arts programmer and has a proven record of strategic leadership with a focus on increasing community impact. We are delighted to welcome her to Kentucky Opera.”

Seattle Opera’s General Director, Aidan Lang, had this to say about Jamison, “Barbara’s leadership has contributed to measurably stronger connections with new, younger, and more diverse audiences at Seattle Opera, which will have a lasting effect on the company’s future. While sad to see her go, I am delighted that she has been given this opportunity by Kentucky Opera to move to the next stage in her career. It has been a real pleasure to work with Barbara throughout my time in Seattle; and knowing the vital role that she sees opera play in any vibrant community, I look forward to seeing this manifest itself in Kentucky in the years to come.”

“It is an honor and a privilege to join Kentucky Opera with its deep history of enriching opera performances and programs,” said Barbara Lynne Jamison. “I’m grateful to the Kentucky Opera board for this amazing opportunity to join such a distinguished company within Louisville’s vibrant arts community.”

Jamison has a Bachelor of Music in Vocal Performance from Florida International University, and a Master of Music in Vocal Performance from Manhattan School of Music. She also completed doctoral coursework as a Dean’s Scholar (Music Education) at Boston University. Since joining the staff of Seattle Opera in 2011, Jamison has spearheaded new programming to increase service to 70,000 people per year across the state of Washington, reaching those not typically served by opera and unlocking access to opera for all. These initiatives include an acclaimed chamber opera series featuring operas in alternative venues. Additionally, Jamison has created and implemented innovative creative-aging programs, camps, youth opera performances, adult continuing education courses, and a variety of school programs.

Through a rigorous selection process, Barbara Lynne Jamison was chosen as a participant in OPERA America’s Leadership Intensive, a program designed to identify and bolster the careers of the most promising professionals in the field of opera. She is an accomplished musician (cello and piano), former professional soprano, Early Music specialist, and conductor.
Barbara Lynne Jamison succeeds Ian Derrer, who was General Director of Kentucky Opera from September 2016 until June 2018 when he was appointed General Director of Dallas Opera. The Brown-Forman 2018/19 Season was programmed by Derrer; plans for those productions are in progress.

“I want to thank especially the hard-working members of the search committee,” added Henry Kuehn. “Their dedication allowed us to recruit an exceptionally qualified General Director for our company.”

Season tickets are now available for Kentucky Opera’s 67th Season at KYOpera.org. Single tickets for Wolfgang Amadeus Mozart’s The Magic Flute and Ben Moore’s Enemies, A Love Story will go on sale at 10am on August 1st. Visit KYOpera.org to learn more.