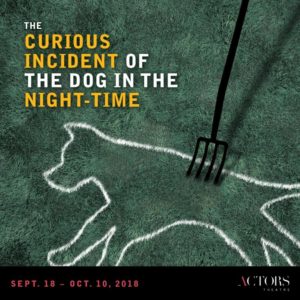 Actors Theatre of Louisville is thrilled to announce the upcoming production of The Curious Incident of the Dog in the Night-Time from September 18 – October 10, 2018, presented as part of the Brown-Forman Series. In this Tony Award-winning adaptation of the bestselling novel, autistic teenager Christopher investigates the mysterious death of his neighbor’s dog after he’s wrongly accused of the crime.

Tenacious and intelligent, Christopher is an autistic teenager who’s better at solving equations than reading social cues, and he sometimes struggles to navigate a world that’s stubbornly out of sync with how his mind works. But when his investigation uncovers painful truths about his family, he dares to strike out on his own, embarking on a thrilling adventure in this Tony Award-winning adaptation of the bestselling novel.

Actors Theatre’s associate artistic director, Meredith McDonough, will direct. Audiences will remember her recent productions at Actors Theatre, including last season’s Angels in America, Parts One and Two; The Santaland Diaries; and the Humana Festival of New American Plays premiere of Marginal Loss.

McDonough shares, “The Curious Incident is a classic ‘whodunit’ story that surprises and delights as it becomes a story of empowerment for this young man. The play is presented non-linearly as it evolves for Christopher; it beautifully reflects his experience the world with great theatricality. For the creative team, it’s an exciting challenge to keep the audience guessing, waiting to see what happens next!”

Local audiences will be delighted to see two familiar faces from last season return to the stage: Brian Slaten (Angels in America, Parts One and Two) and Jessica Wortham (Marginal Loss) in the roles of Christopher’s parents.

This production presents a unique opportunity to collaborate with members of the autism community. Actors Theatre continues its relationship with the Kentucky Autism Training Center at the University of Louisville and developed partnerships with members of Kentuckiana Autistic Spectrum Alliance (KASA) and the Kentucky chapter of the Autism Self-Advocacy Network (ASAN). Autistic advisors and autism specialists provided support and feedback to Actors Theatre staff and artists working on the production, led by Actors Theatre access & inclusion consultant Talleri McRae.

Actors Theatre is committed to investing in accessible theatre-going experiences and will present a Sensory Friendly performance on Sunday, October 7. This performance affords a relaxed atmosphere with slightly raised house lights. Audience members are encouraged to move about or exit the theatre as needed. McRae explains, “The performance itself will remain virtually unchanged, though the theatre environment may feel different. Actors Theatre will provide patrons with detailed information about what they can expect while at the theatre, as well as a list of some of the more sensory-intense moments in the show, and when to expect them.”

Tickets are now on sale to the public and are priced from $25. Tickets can be purchased by calling the Actors Theatre Box Office at 502.584.1205 or online at ActorsTheatre.org. Special ticket rates for groups of 10 or more are available by calling 502.585.1210.

For additional event information, and to purchase tickets, visit ActorsTheatre.org or call 502.584.1205.